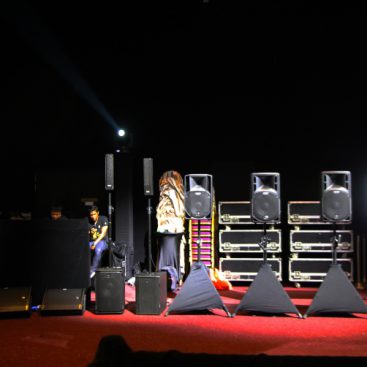 Acoustic & Lighting System (“A&L”) hosted a spectacular RCF Open Day at the Joyden Hall, Singapore on 22nd May 2019, which lasted from 11am to 6pm, and saw a total of more than 60 invited attendees coming from rentals, integrators, users and consultants. The session was divided into 2 groups, one in the morning and another for the afternoon, giving guests the opportunity to choose their favorable session. Eugene Yeo, A&L’s General Manager, started the event with a short introduction on RCF. Even before the session started, guests were excitedly walking around the showcased speakers to know more about them.

This RCF Open Day was organized to introduce RCF’s new compact bi-amped 2-way active touring system, HDL 28-A. Functional both indoors and outdoors, with an emphasis on vocal intelligibility, this speaker is considering its acoustical power, which has a remarkably low weight for easy handling and flying. The improved rigging concept derives directly from its big brothers, the RCF HDL 30-A and HDL 50-A. The remarkable FiRPHASE filters enables to obtain coherent distribution of sound for all users and listeners in the absence of phase distortions, securing minimal latencies to the system.

The Open Day featured the full demonstration on 3 key latest systems. The all new HDL 28-A, HDL 26-A and HDL 30-A was rigged and presented to sound professional for the audience. The guests were able to hear the difference between the 3 products. Product Specialist for Pro Audio Mr. Lucio Boiardi Serri, of RCF S.P.A., covered well about the equipment and explained clearly for the questions asked by the guests throughout the day. The expectation among the attendees grew as they experienced the impressiveness of HDL 28-A.

Mr. Lucio used the upgraded RDNet software to correctly shape sound beams and determine the right angles in order to cover the whole area with the right dispersion. The guests had the opportunity to inspect the products at close quarters, as well as walk around the room as the systems were being switched. Overall, the guests who attended the Open Day were exposed to the quality product of RCF pro sound but also gaining knowledge on the configuration and types of speakers to use in different situation. Eugene Yeo, A&L’s General Manager shares, “We were pleased with the turnout of this event. It has been a while since we did a RCF Open Day in Singapore, so this time round it gave us the opportunity to reintroduce the brand to the market, and how its products have evolved throughout the years.”